Forum for the discussion of all International Rugby

11 players from the original RWC squad not involved, nor is Jordi Murphy who went out as an injury replacement.

Thank you, Would it kill the IRFU to put up the team in this format which would be much easier for people to digest, same with leinster and the euro squad.
Top

There’s very little experience backing up Sexton. How late will the Scots hit him? Take your pick

- They’ll still be hitting him when we’re playing Wales
- They’ll have to pay Xtra Vision £2.50 every time
- It’ll be so late it counts as a pregnancy scare
- The Air Coach will deem it “on time”

The development players are a good idea
Top

Hooker selection is mad. I don't think Scannell is brilliant by any means but hard to know what Heffernan has done to be in there ahead of him and Cronin.

Very disappointed for Rhys. He deserves to be starting never mind not in the squad in my eyes. Good to reward JOD but POM really doesn't deserve to be in ahead of him.

Fair play to DK. Having an excellent season.
Top 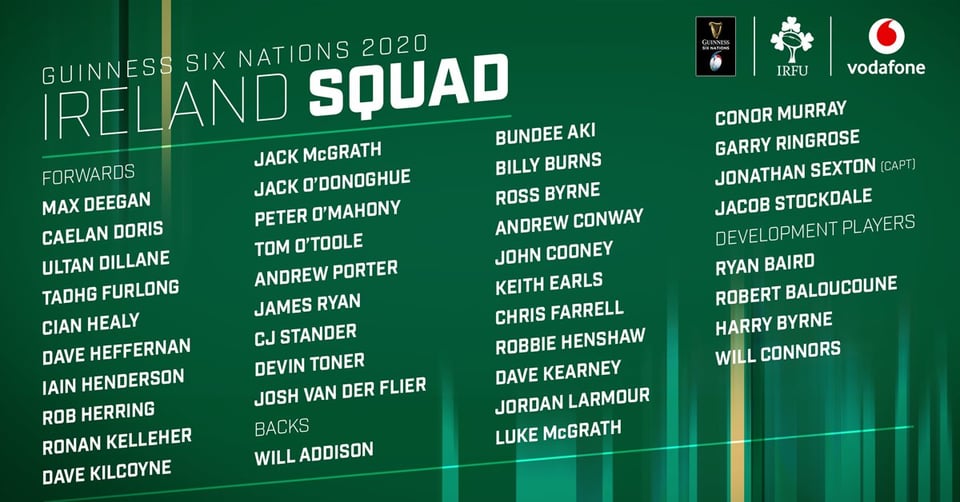 Surprised with inclusion of Burns without McCluskey. Hard luck on Rhys, but Leo and Leinster will be happy to have him for the next 7 weeks whilst missing Doris, Deegan, JVdF and Connors.

Tom O'Toole should feel very lucky to get in ahead of Bealham and Marty Moore. Jack McGrath's inclusion is very welcome. Heffernan is an excellent scrum operator, much improved with his darts and a very aggressive ball carrier. He could bench against Scotland.

J10 being named as Captain could signal the end of PO'M as an automatic backrow selection.

Broadly a form selection and on that basis Dave Kearney will give hope to everybody in good current form. Looks more and more like RK will be stuck at 95 caps.

Kelleher is the closest to a surprise selection but Scannell's omission may be biggest shock.
Top

Odd in some ways that Ruddock doesnt make the cut when Doris and Deegan do. I suppose the positional element might make some difference.

Given the need for experience it's strange to pick such an inexperienced panel of hookers.

Wasnt sure McGrath would make it as a loosehead. Happy that Toner is back, even though it's a no-brainer.

Farrell is managing without the safety blanket of experienced players like Rob and Cronin. Earls is possibly lucky but form can change in camp.
Top

Very disappointed for Rhys, think he's in better form than POM to be honest. Two successive coaches haven't picked Big Stu even though he's now in cracking form. I'm a bit less surprised by that than many. Big French and English centers eat what he does for breakfast, we need to offer something different. i wonder will he look for the money in France or England going forward if he's not getting picked for Ireland.

With regard to the captaincy. J10 is one of a few that are fairly close to automatic selections and in modern rugby player leadership tends to be more group driven. Each club or country has a leadership group so the role is more collective.
Flash ahhhh ahhh, he'll save every one of us
Top

I really like Andy Farrell and hope he is a huge success but not picking Rhys Ruddock is a shocking decision.

The team for Scotland will give another indicator of Farrell's thinking but if Stander and POM both make the starting 15 then the Andy Farrell era doesn't bode well. Picking one of Stander and POM due to experience would be understandable. Picking both would be nonsense.

Thought Stuart McCloskey would be a shoe in considering Farrell is widely believed to be the driving force behind the Sam Burgess selection in RWC 2015.

Was such a joke that Toner wasn’t involved in the RWC, with Kleyn not being picked for 6 nations 2020 it just goes to show that it was the wrong call picking him ahead of Dev Toner
Top

elephantman wrote:I really like Andy Farrell and hope he is a huge success but not picking Rhys Ruddock is a shocking decision.

The team for Scotland will give another indicator of Farrell's thinking but if Stander and POM both make the starting 15 then the Andy Farrell era doesn't bode well. Picking one of Stander and POM due to experience would be understandable. Picking both would be nonsense.

Thought Stuart McCloskey would be a shoe in considering Farrell is widely believed to be the driving force behind the Sam Burgess selection in RWC 2015.

Dave Heffernan being selected is baffling.

Johnny Sexton fell into a ring of fire...
"It was Mrs O'Leary's cow"
Daniel Sullivan
Top

........ no Zebo!!!
It wasn't just Joe.
Is he injured?
Has he tweetd yet or will he wait for our first defeat?
You know I'm going to lose,
And gambling's for fools,
But that's the way I like it baby, I don't want to live FOREVER!
Top

Gutted for Rhys and don't get it at all. One of the few players who looked in good nick at the World Cup, still in good form, versatile, a leader....the list goes on. I wonder if Deegan and Doris being involved means that Stander will be playing at 6 though? Even if he is I'd still have Rhys in there. I had a feeling that at least one of Stander and POM would still make the 23 but now it looks like being both and that's really disappointing IMO.

I'm really surprised by the Scannell omission, think he's been playing quite well and seems like a really solid option to have. I guess Herring has similar kind of form and has never let Ireland down in the past, but I'd have had both of them in. Heffernan is powerful but his darts are very dodgy and he can drift in and out of games. Given that Kelleher is so raw I don't see why you'd pick both of them.

I don't get the fuss about McCloskey, for every good thing he does there's a sloppy error and four centres plus Addison and Larmour covering if needed is probably enough.

I thought ronk was nuts to think that guys who weren't at the stocktake had a chance to make it but he was right and I was very wrong. Jack McGrath has definitely looked better recently and I think our LH situation suddenly looks much healthier in the short term, although still think Porter should be a LH from next season onwards. Not sure about Marty's injury situation but his conditioning still has to be a big concern anyway. I really like the look of TOT and think he'd be able to slot in and do a decent job just by working his arse off.

I like that Baloucoune was given that development role as well. I said recently that I'd like to bring players in like that for a week or two during the tournament but didn't name him. He's been brilliant recently though and we're not exactly blessed with right wings.

I'd like to see the captaincy shared around a bit though e.g. Ryan getting it at the end of games or maybe once from the start.
Top

Hadn't noticed that Kleyn didn't make it. I'd love to have been a fly on the wall when they were discussing himself and Dev.

I'm a bit confused about the kind of player Farrell wants. Herring and Dev are back in the good books and are very solid, but then so is Rhys and he's not there. Scannell has been pretty solid but doesn't make it, yet Herring is similar and does. Jordi probably fits into that category as well but it's not like he's been replaced by a SOB type 7.
Top

Herring’s throwing has been worse than bad, makes Rory Best look like the Lord of The Lineout; very lucky to be there.
Top

Some Munster fans have said that Kleyn has picked up a neck injury and will be out for a while, so we might not know if he’s dropped or injured.
Top

He's also just not very good at all. Schmidt always had a soft spot for a Damien Browne type that nobody else would pick and Kleyn wouldn't get a sniff at Leinster's 23.
Datta: what have we given?
My friend, blood shaking my heart
The awful daring of a moment's surrender
Which an age of prudence can never retract
What the thunder said to Brian Lenihan
Top
Post Reply
346 posts